Everything came together nicely this week.  I saw my first z-fold pop-up box card, and fell in love with the new fold.  However, the one I saw was cut and folded mostly from one piece of cardstock, and I didn't feel up to that much measuring and cutting.  I went looking, and with some help from a FiskaFriend, found a template by Lori Whitlock.  She has several, and because they were on sale, I bought several!  Makes sense, right?  She even had one with a pick-up truck.  Perfect in so many ways!  A Christmas card for my oldest grandson who restores old cars!  And a pick-up for PCC's Magazine Monday theme!
With Granddaughter by my side pushing buttons and peeling cardstock off the mats, we cut it out on the Cricut.  With a new lock on the inside of my craftroom and two toddler grandsons outside the door, it came together perfectly!  :o)
I didn't take many liberties with the template, and what I did doesn't show much in the photo.  I cut a window for the pickup out of a scrap of acetate.  Looks so cute!  I used the write feature for the greeting rather than cutting it and inked it with a glittery red gel pen.  Rather than cut snowflakes, I punched them out of glitter paper for more detail.  I used Wink of Stella on the tree in the back of the truck, and embossed the other two. 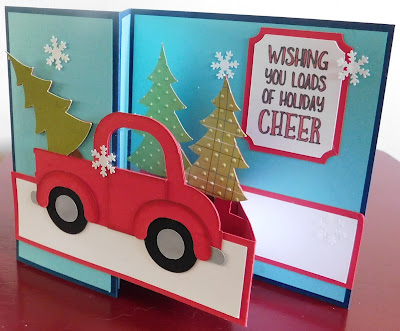 This was a totally awesome card to make (maybe because of the help I had outside the craftroom and didn't have inside the craftroom!).  Now that I can see the dimensions of it, I will easily replicate it in an A2 card, but first I will probably have fun just doing the other Lori Whitlock ones I bought. Way fun!
Posted by Suzi at 4:56 PM 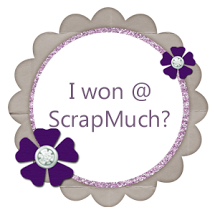 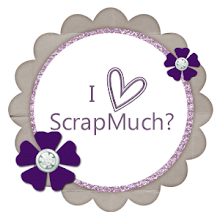